In June, Walmart workers around the country walked off the job in a coordinated strike to protest working conditions at the nation’s number one private employer. In a fit of revenge wreaking of a Hollywood sequel, Walmart has begun terminating employees. Jenny Brown of Labor Notes reported that 60 Walmart employees have been disciplined “after a pause” — including two dozen fired — for participating in a one-week strike in June 2013. A shareholder’s meeting near Walmart headquarters in Bentonville, Arkansas, was also targeted by OUR Walmart organizers.

OUR Walmart is a collective of former and current Walmart employees who advocate for better working conditions. Since the group’s formation in 2011, they have organized several one-day strikes, including over the previous two Black Fridays, traditionally the busiest shopping day of the year. They submitted a formal declaration to Walmart executive management in 2011 outlining a list of demands for a minimum of a $13 per hour wage, affordable healthcare, the creation of dependable and predictable work schedules, as well as asking to be listened to and respected. Their last demand is politically relevant in an impending age of austerity: “Provide wages and benefits that ensure that no Associate has to rely on government assistance.”

After the Bentonville strike, targeted workers weren’t fired or disciplined right away. Three weeks passed before workers learned of their fates. Federal law protects workers from being fired for workplace organizing, but one Bentonville supervisor told an employee that they “don’t recognize strikers.” Instead, workers were informed that they were being fired for violating Walmart’s no-call, no-show policy. But employees did have call confirmations from Walmart’s attendance line. OUR Walmart had also faxed a list of striker names to each Walmart store location prior to the dates of the strikes.

Stories of harassment are common from employees agitating for worker rights at Walmart.

“We fear that every day we go to work could be our last,” said five-year Walmart employee Heidi Baizabal. “We are followed, watched on camera, forced into individual meetings, and harassed daily. We need Walmart to see what’s happening inside its contracted warehouse. We move Walmart suitcases and we want safe, good jobs.” 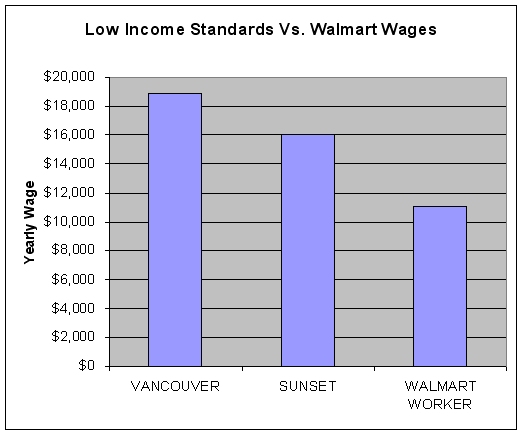 Bernie Sanders (I-VT) has been an outspoken critic of Walmart and its owners. On a recent appearance on “The Ed Show,” he lambasted the company and its owners for benefiting from multi-billion dollar taxpayer subsidies.

“When you pay, at Walmart, starvation wages, you don’t provide benefits to your workers, who picks up the difference?” he asked. “The answer is that many of the workers in Walmart end up getting Medicaid, they get food stamps, they get affordable housing paid for by the taxpayers of this country while the Walton family remains the wealthiest family in America.” Sanders also said that the total wealth of the six Walton family owners exceeds the accumulative wealth of the bottom 40 percent of American income-earners.

“We’re the ones working and putting money into the Walton family,” said Aubretia Edick, a 13-year Walmart employee in Granby, Massachusetts, “But we’re sleeping in cars and at friends’ houses.”

Opening a Walmart store in a community is akin to the launching of a brand new Death Star in the realm of Star Wars — someone is bound to get blown up. The first to be impacted are the mom-and-pops and small business owners who cannot compete with Walmart’s plethora of cheap Chinese goods. Many end up closing their doors for good soon after Lord “W” Vader comes to town.

In an Austin neighborhood in Chicago, 306 businesses were counted in one study at the opening of a brand new Walmart store. Within two years, 82 of those businesses closed down. Perhaps the greatest victims of Walmart labor practices in terms of dollars and cents are American taxpayers. An update to a 2004 congressional report from the U.S. House Committee on Education and the Workforce estimates that Wisconsin taxpayers shell out up to $1.7 million per Walmart super store in the state, with a minimum cost of at least $904,542 per store, per year. That translates to an annual $5,815 per Walmart employee in the state of Wisconsin alone.

What to do When Walmart Retaliates Against You Taxpayer subsidies aside, the greatest suffering can be squeezed from the rank and file of 1.3 million Walmart employees who must subsist on Walton family wage slavery. Not surprisingly, research indicates that Walmart’s low wages also impact communities wherever the company sets up shop. A Berkley study found that between 1992 and 2000, that the opening of a single Walmart in a county dropped general merchandiser wages in that county by one percent. However, wages across the board fell significantly at the national level.

“With an average of 50 Wal-Mart stores per state, the average wages for retail workers were 10 percent lower, and their job-based health coverage rate was 5 percentage points less than they would have been without Wal-Mart’s presence. Nationally, the retail wage bill in 2000 was estimated to be $4.5 billion less in nominal terms due to Wal-Mart’s presence,” the study found.

There were also 629 “smaller” non-super center Walmart stores in the United States as of March 2012 and 611 Walmart-owned Sam’s Clubs. It remains unclear how many billions US taxpayers spend in total subsidizing Walmart’s business model.