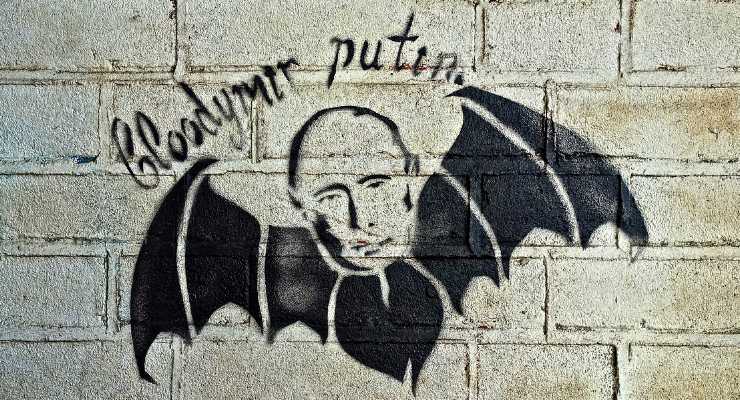 Like others, I am outraged by the Russian invasion of Ukraine, but it feels almost dishonest as a peace-loving person to give in to the righteous indignation gripping the mainstream U.S. media.

To buy into the War machine gearing up; To buy into the possible coming of WWIII, this is self-destructive passivity in response to authority.   In a recent New York Times op ed, Thomas Friedman argues that the U.S. is playing a dangerous game with leaked  intelligence support provided to the Ukrainians.  The charge that the U.S. is involved in a proxy war against the Russians is not in any way lessened by the fact that Putin has made the same charge.

We are in unchartered territory geopolitically when we acknowledge this double truth.

Yet, the suffering this war has unleashed is too much for any reasonable person’s feelings. It’s almost unbearable. If I were there, I wouldn’t qualify that statement at all either, or I would probably find these hedging words offensive.

How to see Vladimir Putin’s imperialist fantasy, then to start? I’ve always seen the former KGB power player, Putin as a velvet glove, iron fist leader.  After what he has done in Ukraine, I’m tempted to see him as an embodiment of the death drive.

I’m not sure if he always was or wasn’t.  Does it matter to Ukrainians in Mariupol?

He bears more than a little perversely ironic resemblance to Dostoevesky’s freedom-snuffing Grand Inquisitor – wreaking death with his decrees.  Killing women and children in the name of the purity of an Ethnic-Religious-National State order.  He proposes in quintessential doublespeak that he is “denazifying” a Ukrainian nation that houses fewer far right white nationalists than Russia itself (or Chechnya).  His soldiers murder civilians in cold blood waiting in bread lines.  His artillery reigns down as crazy willy-nilly pathed birds of death on theaters housing women and children.  He bombs hospitals with savage precision.  Inspired by or haunted by the specter of the siege of Stalingrad, he has razed Maripuol. What’s next? A `tactical’ nuclear bomb for Kyiv?

What does he promise to Russians?  Security!?  A return to Russia’s imperial glory!?  A futile gesture at turning back the clock meant to stir nationalist pride, I think.  A fear of the West beneath it all to some extent, and of course, as with all wars, an aggrieved masculinity in the form of injured national or ethnic pride.

In his early seminars, Jacques Lacan writes of the ‘death drive’ that it is a movement to pre-oedipal union with the mother, essentially taking the person into a realm of imaginary plenitude. It’s a kind of nostalgic denial of history, both personal and cultural, in the name of a blissful wholeness that is regressive or contra to the Symbolic order.  Often associated with primary narcissism, and the emotion or mood of nostalgia, the ‘death drive’ is distinct in Lacan’s early work from the ‘symbolic order’ which is the order of culture and by implication immersion in history.

This is not intended to be a strictly Lacanian psychoanalysis of Vladimir Putin, or it didn’t start out as that, but I find this account useful for understanding his decision to invade a neighbor with an intertwined but distinct history and some degree of national sovereignty from Russia’s rule.

What of the U.S. and NATO response?  It has been understandable, and it has also been trafficking in a dangerous hegemonic fantasy, especially as of late.

When the U.S. secretary of defense proclaims that the new U.S. strategy is to weaken the Russian army so much so that they will commit another breach of a country’s border, such as Moldova, or, even, a NATO country like Poland, this isn’t transparency. It’s new kind of brazen Realpolitik 21st century style.  More than that though, it ignores the fluidity of the situation on the ground in Ukraine as well as the new geopolitical realities that the Russian invasion has made apparent.

The first aim now should be preserving some semblance of understanding with Russia regarding the catastrophic untenability of using nuclear weapons in the conflict.  Simply calling out Russian displays of Nuclear might as “bluffs” or ‘posturings’ won’t do anything but heighten the risk of a real conflict and perhaps a nuclear one.

As much it feeds into a fantasy about Russia’s status as second rate military power and the exceptionalist fantasy of the U.S. as the preeminent leader of the Democratic free world, it also is a dangerous gambit. Putin’s war was not a call to arms for a multiprong new world order as much as he wishes that it were or that he could fly under the cover of that rhetorical flag to advance his imperialistic aims.

Yet, the world is multipronged always already.  Much like Lacan’s symbolic order, we only find a place within it through the Other.  We, the United States, are not the only nuclear power.  This is a fact.  Economically, we are dependent upon China as much as we posture with them in a future battle for control over the autonomy of Taiwan. That Putin is a caricatured moral standard bearer for the multipronged world order does not mean that it (i.e. the multipronged order) doesn’t exist.

Here is where the U.S. media is largely wrong and of course utterances by the U.S. government that stated policy is to weaken the Russian state or emasculate it are flawed in a dangerous way.  We can be supporters of a strong, non-isolationist Americans, and we can acknowledge the reality of a multi-pronged world order.

No one said it would be easy.

Part of that involves showing some respect for Russia’s need for end of this unjust war that they started with arguably the most viciously imperialistic of aims.  It’s difficult for many to acknowledge this, yet it must be a seen as the lowest common denominator to a way out.

The first register across which it is true is the familiar need to allow Russia, or Putin some “face-saving,” for an exit to a war he recklessly started.  An aggrieved Russia at the hands of a powerful West, is too familiar a narrative.  Yet, cliche or not, we are sowing the seeds for a future conflict as well as risking catastrophic escalation of this one if we don’t acknowledge the power of this belief in Putin’s or the Russian psyche.

Robust sanctions were a necessary, non-military risk.  They surely exacerbate the conflict, but they are a clear boundary line for an irrational national actor.  They have potential traction too among the Russian people who could with access to Western media see the sanctions as a non-violent stance by the West on an unjust war.

Increasing miliary aid in the form of smart munitions, high level military intelligence support, powerful howitzers from Germany, the U.K. and the U.S., advanced anti-missile systems, and now an extension of Lend Lease as a kind of carte blanche to Zelensky’s armament wish list is maybe a bridge too far though as the conflict intensifies.

In a recent interview, Noam Chomsky attempts to situate the Ukraine situation with Israeli occupation of Gaza, the Yemeni crisis, and others.  He isn’t wrong to do so, as the propaganda machine revs up for war in the U.S. Yet, it’s hard not to hear his words as apologia for Russian imperialism too.

But Chomsky is not wrong is when he says that we run the risk of arming Ukraine for a grim battle to the death. Do we really want to turn Ukraine-Russia into a death match that no one wins? A game where everyone loses because no one can claim a real victory or save nationalist face before a staggering loss of life?  Then, after the spilling of too much blood (however Putin or Zelensky measures that), and after too much privation in the face of sanctions, there will ultimately be the prospect of real, genuine peace talks.

How far does NATO and the U.S. have to go in this psychotic game of mutually assured loss of tens of thousands of Ukrainians and Russians?  Is it smart to play along, arm the Ukrainians at new levels of lend lease recklessness while making gestures at peace that arguably contradict our decision to arm them carte blanche?

Chomsky argues that Ukraine must pledge not to join NATO, essentially become a fully neutral state, and agree not to have armies or weapons threaten Russia on its borders.

It’s hard to imagine Ukraine will accept being a fully toothless nation.  Indeed, even though it sounds unreasonable to ask Ukraine which has been unlawfully invaded to accept even non-membership into NATO, this must be a starting point for negotiations.  It may sound unreasonable to negotiate with a regressive autocrat who has broken promises and peace agreements in the past.  It sounds like a psychotic thought though to arm Ukrainians to fight to the last Ukrainian while increasing the risk of nuclear or, even, conventional war with Russia.

There must be a middle way that allows Ukraine to remain an independent neutral nation with viable armed forces that could repel another invasion, but which do not threaten Russia.  And there must be a way to deliver these promises in a credible way through U.S., U.N., Israel, and, perhaps, Baltic nations mediated peace negotiations.

For years, Jamie Lampidis drifted from one graduate teaching associateship to another lecturing gig with an odd nonprofit and many document review projects thrown in for flavor. He sometimes said, and in fact was an itinerant dreamer. While he never rode the freights, he did slog his way across Columbus, Ohio, North Conway, New Hampshire, points in New Jersey, Rhode Island and of course Brooklyn. Occasionally, there were imaginative flights. At other times, there were long silences. He has found a home for the last six years teaching at Medgar Evers College (CUNY). He hopes to continue dreaming, or, at least, writing with fewer silences.