The film Modern Times depicts a scene in which Charles Chaplin works on a factory; where after being subject to several indignities as being force-fed by a “modern” feeding machine and an accelerating assembly line at an ever-increasing rate, he suffers a nervous breakdown and loses his screws, throwing the factory into chaos. One doesn’t need only to LOOK at this scene from a Marxist or Psychoanalyst lens to SEE that the exploitation of the working class and its negative effects on the human being’s psyche is what this film critiques. Right? Left, I mean, right!

Actually, the audience of the film doesn’t even have to speak English (or any language in particular for that matter) as the film is mostly silent. The viewer just has to take the time to imagine himself or herself on Charles Chaplin’s situation. Can you? Can I? Can we? Actions SPEAK louder than words.

There’s no real resting for Charles Chaplin in this factory scene, as he is been watched by Big Brother, I mean, the big boss even during his break in the restroom. Between the surveillance camera and the constant speed of the machine, Chaplin knows he must always be on his toes. This is not something we would wish on us or anybody, would we? We’d all be like him, worn out and probably get home and could barely stay still.

Albeit this film is from 1936, the ruthless drive for competence at U.S. companies has created similar austerity inside the psyche of employees in the modern workplace. In their keenness to make sure that no time is wasted, companies are demanding painstaking performance quotas and forcing in extra hours that might be paid or not. Video cameras and software constantly track workers performance, for example, their computer keystrokes and the time on each service phone call. 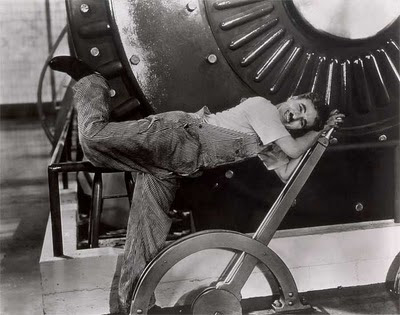 Most employers don’t necessarily want lasting relationships with their workers. Corporations are asking employees to work harder and harder without providing the kinds of rewards, financial and psychological, that would be fair. Employers assume that if some quit, there are many others looking for jobs.

Salaries are stationary, jobs are not secure, work is intense; it’s as tough a world as the one depicted in the film. Employers are as antagonistic about streamlining work in ways that set in motion faster productivity. Work is drenched into off hours, as bosses shower employees with email messages at night and on weekends. They even scrutinize employees’ Facebook pages for comments that diverge from the corporate message.

The growing demands at the workplace mean human beings, who are not machines, have less time for themselves, for their psychological well-being. Now, tell US, how is the psyche of the worker nowadays different from Charles Chaplin’s in Modern Times?
“_________________________________.”