Today is the four year anniversary of Citizens United Supreme Court ruling, so let’s talk about the pervasive influence of corporate PACS is out of hand 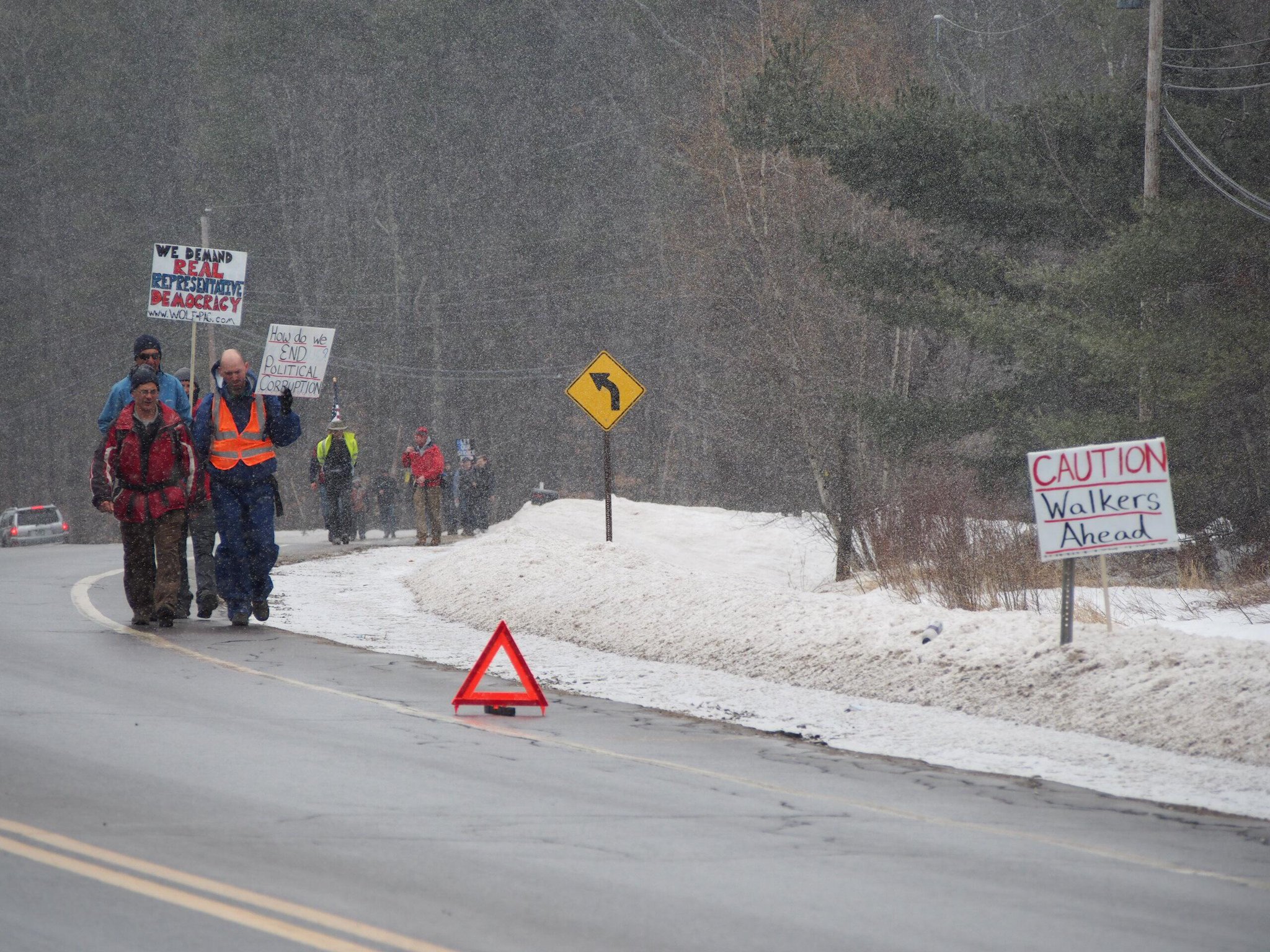 Yesterday I spent Martin Luther King Jr. Day five hours North of NY-7 marching in the New Hampshire cold and snow with Harvard Professor and author Lawrence Lessig.  Dr. King’s message was one of equality and fairness. Professor Lessig has been marching for a similar cause for two weeks from Northern to Southern New Hampshire – the first state in the nation to vote for a president. He is trying to draw attention to the inequality and injustice that exists in the way our campaigns are funded that hopefully will be a national issue once the campaigns for the 2016 presidential elections begin. What will you do to help end the systemic corruption in our electoral politics?

Today is the four year anniversary of Citizens United, the Supreme Court ruling, so let’s talk about the pervasive influence of corporate PACS and how money in politics has simply gotten out of hand. Indeed, they are affecting how we are living our lives, who is elected to office and how our government is run.

Our opponent accepts funding from different corporate and special interest PACS, ranging from the giant telecoms, to real estate concerns, to big banks, to sugar companies, to you name it. What, exactly, do they hope she does when legislation comes up that will affect their various industries and interests? What issues are they hoping that she stay silent on?

Corporate PACs have more money than you. Our opponent has raised more than us. Corporate PACs can give $5,000 per election, real people can give “only” $2,600. To them it is chump change and they splash it around freely to candidates on both sides. To me, and most people, $2,600 is a lot of money.Can it be argued that PACS are more influential than your vote?  They are determining who is running for office (most people are not as crazy as me!), who is running our government and what our leaders value as priorities.

Corporations have their place. I know. I am a business attorney. They provide entrepreneurs incentives, give people jobs, provide us goods and services and provide the state revenue through their taxes. Corporations are doing what is logical for them, but it is not logical for us or our democracy.

So should corporations be making our policy? (Let’s have less regulation and create some offshore tax loopholes!). Are corporations really people entitled to free speech under the first amendment like we are? Why do we allow corporations to organize PACs and give money to candidates or spend money on elections? What do you think when this happens? I think it is wrong and a serious and fundamental corruption on our democracy.In 2012, only 10% of registered voters voted in NY-7’s June primary election. Why so low for a twenty year incumbent in such a great democracy? I believe cases like Buckley and Citizens United (and perhaps soon McCutcheon) promote voter apathy and cynicism. This is our challenge.

Voters are smart – and yet 90% of Democratic voters chose not to participate last cycle. Voters understand the conflict of interest. When corporations spend money on elections – through PACs, Super Pacs, 527s, 501(c)(4)s or whatever you want to call them or however you want to legally frame them,we all understand the very real conflict of interest created by this corrupted system where the 0.01% and largest corporations treat our elections as their private auctions. And most incumbents are just fine with it because the gravy train is just fine for them.

Democrats blame Republicans. Republicans blame Democrats. And then no one is really trying to solve the problems of our country. It reminds me of the nuclear arms race where each side is just trying to outspend the other and it is pure insanity. Before we can begin to address the problems of the homeless, our dilapidated public housing, the low salaries for our teachers and social workers, the lack of good jobs and the high unemployment, a minimum wage that cannot pay the rent, that we do not properly label our foods that contain toxic GMOs, that we need funding for our kids’ schools and after-school programs and our worsening environment, we must address this giant elephant in the room because it is blocking reform on all the matters that are important to the people of NY-7 and districts like ours around the country (hint: that’s your district).

This is why I need your help today. To my knowledge, I am the only candidate in the country refusing both PAC and lobbyist money. I will be answerable only to you — my friend and fellow citizen.  And when I win the election come this June 24, others around the country will start running and winning the same way. And that is our sacrifice – to help end this corruption on our democracy and restore the power of our country to the citizen where it belongs.

When I am elected to Congress, it will just be the beginning. I will fight for publicly financed elections at the national level like we have in NYC and a constitutional amendment to overturn Citizens United to say that corporations are not people for purposes of the First Amendment and our elections. With your help, I know it can be done. But I cannot do it alone.

p.s. I found this info-graphic on Mother Jones and thought you might enjoy in case any of your friends are talking about Citizens United today. 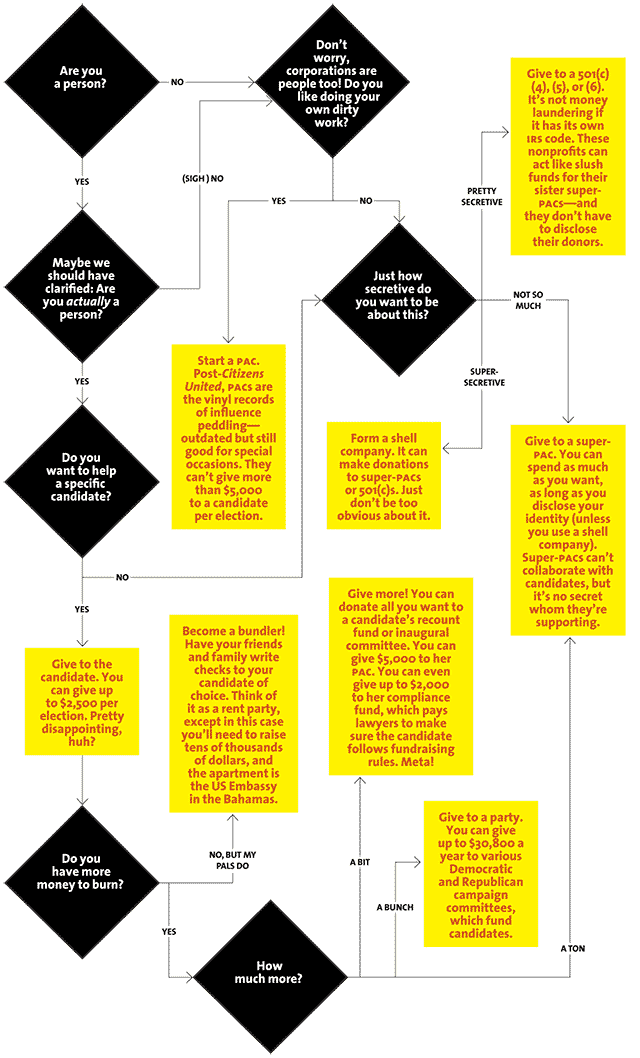 Home | DC AUTHORS | On the Fourth Anniversary of Citizens United