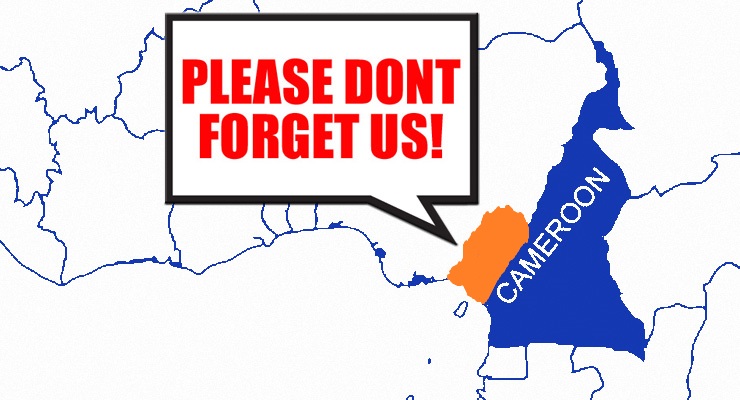 Sisiku Julius Ayuk Tabe, leader of the Anglophone separatist movement in Cameroon and 9 others (Co) have been found guilty of all charges against them by a Yaoundé military court and given life sentences. The Ambazonian leaders sang revolutionary songs as the life sentence was handed down.

Ayuk Tabe, who is an ex-employee of the defunct State electricity corporation known by its french acronym, SONEL, is the first self-proclaimed president of “Ambazonia”, a separate, purportedly self-declared, Anglophone State with territorial confines encapsulating the predominately English speaking Northwest and the Southwest regions of Cameroon, contiguous and conterminous with the erstwhile British Southern Cameroons.

He was arrested in Nigeria’s capital Abuja in January 2018 and thereafter transferred to Cameroon with 9 others. All through their trials, they called themselves Ambazonians, denying the Cameroonian citizenship.

The court session which lasted until 5:36am Tuesday morning created tensions in the country as many observers and activists described it as being a “shameful trial”. Many Cameroonians have expressed their disappointment over the the life sentence dished out to Ayuk Tabe and the others as a result of the hearing and fear that it may prolong the bloody conflict in the Anglophone regions such that a ceasefire may become hard to come by

Ayuk Tabe and Co were convicted of charges including terrorism, hostility against the state of Cameroon, and secession and were given a fine of 250 billion together with the life sentence.

“It’s terrible Mimi we just left the court now after our clients were all sentenced to life imprisonment each and all jointly to pay a civil award of 250 billion FCFA to the state and civil claimants. Again the will pay cost of more than 12 billion FCFA jointly if they fail to pay the fine. We went to court at 9 am yesterday and left at 6:30 this morning”.

Barrister Tifuh, a member of the Defense counsel said.

The court’s decision reinforces stalemate in the Anglophone conflict

The severity of the sentence has raised fears that the bloody conflict playing out in Cameroon’s Anglophone regions between separatist rebels and military forces will be prolonged, and that no ceasefire will be possible.

The ongoing Anglophone crisis started with teachers and lawyers corporate demands in 2016. Human Rights Watch statistic shows that close to 2,000 people have lost their lives during this crisis. The regular clash between the separatist fighters and military has displaced more than 530,000 people in the two Anglophone regions.

Agbor Balla Nkongho, a lawyer and chairman of the Center of Human Rights and Democracy in Central Africa (CHRDA), still has hopes the government may change the ruling.

“I am hoping it will lead to an appeal within the next ten days as the law provides,” he told DW. “It might also be an opportunity for [President Paul Biya] to grant clemency because [in Cameroon] everything is done to make the president look good.”

In another way, the sentence may adversely affect the peace negotiation between the government and the separatist been facilitated by Switzerland as Agbor Balla said,

“We are now back to a stalemate so we don’t know whether we are moving forward or we are going backward or we are in the same position.”

The Swiss Ambassador to Cameroon, Pietro Lazzeri, in July during an interview with the state media made it clear that Switzerland was a refereeing the conflict and needed “the willingness of the parties in order to build the dialogue.” Many now say that the court’s decision is a clear statement from Yaounde that it is not interested in the discussions, at least if they are not going to be on its terms

A verdict that sounded like a challenge to the U.S.A

The political crisis has been in the country for a very long time and everyday Cameroonians pray for interventions  with hopes that it will one day become a thing of the past. However, the Ayuk Tabe life sentence has left the people wondering what will become of the country going forward.

The United States of America (U.S.A) has been at the forefront of calls for an end to the violence and the reconstitution of the federal system of government that prevailed from 1961 to 1972. The Cameroonian regime has been in an open diplomatic tussle with the U.S.A over the crisis, clearly defying the superpower’s positions for ceasefire, dialogue without pre-conditions, release of all arrested including Ayuk Tabe and all others arrested in Nigeria, and the possibility of a return to the federal system of government.

The US Congress passed resolutions to that effect the latest being the U.S. Senate’s resolution 292 following which the Yaounde life sentence verdict came, in a way giving Cameroon’s response to the U.S. Through the judgment, the Cameroon government in the capital Yaounde has loudly and clearly told the U.S.A that its positions on how the conflict can be resolved, which positions, many argue, are adequate seen that they address the root causes of the problem to a great extent, notably the question of releasing all those arrested in connection with the crisis in order to ease tensions, are good for the garbage bin. Yaoundé seems to have made it clear to Washington that it will never release Ayuk Tabe and will not enter into any dialogue without pre-conditions.

This response by the Yaoundé regime is more than less an invitation, somewhat a dare, for the U.S.A to make other proposals or take other actions. Considering that China and Russia are on the side of the Yaounde regime, this tussle between the U.S. and Yaounde is making the Anglophone crisis/conflict to take on international proportions, a threat to world peace. There is an urgent need for an international response to this problem through a forum to discuss the crisis and find an immediate solution to put it to an end and resolve the conflict sustainably.