***Starting at Columbus Circle then march to Trump Tower***

Trump is the Sexual-Predator-In-Chief. Pence is a Christian fascist at war with women’s right to abortion, birth control & basic humanity. They’ve already reimposed and massively expanded the Global Gag Rule, denying millions of women worldwide access to abortion and other healthcare, and condemning many to death. They’re moving fast to remake the courts, to defund Planned Parenthood, and to slam women backwards in countless hideous and enslaving ways. This misogyny is a key plank of their all-round fascist remaking of America that MUST NOT BE ALLOWED.

Take to the Streets! Bring your signs, your friends, your classmates, and your FURY!

Break the Chains! Unleash the FURY of Women!
Say NO to All Forms of Female Enslavement!

Sunsara Taylor of RefuseFascism.org speaking out about what it will take to bring down the Trump/Pence regime and urging people to dig deep into their pockets to support the #RefuseFascism organization to do the work that needs to be done to dismantle it. Wearing white surgical pants covered in red paint all down the inside of the crotch area and inner thigh to illustrate the numerous women throughout history who were forced to turn to the wire coat hanger as a solution to unwanted pregnancies before the Roe V Wade act came into existence in 1973 making safe, legal, early term abortion widely possible.

The following is an excerpt from the Roe vs. Wade Supreme Court case:

A pregnant single woman (Roe) brought a class action challenging the constitutionality of the Texas criminal abortion laws, which proscribe procuring or attempting an abortion except on medical advice for the purpose of saving the mother’s life. A licensed physician (Hallford), who had two state abortion prosecutions pending against him, was permitted to intervene. A childless married couple (the Does), the wife not being pregnant, separately attacked the laws, basing alleged injury on the future possibilities of contraceptive failure, pregnancy, unpreparedness for parenthood, and impairment of the wife’s health. A three-judge District Court, which consolidated the actions, held that Roe and Hallford, and members of their classes, had standing to sue and presented justiciable controversies. Ruling that declaratory, though not injunctive, relief was warranted, the court declared the abortion statutes void as vague and overbroadly infringing those plaintiffs’ Ninth and Fourteenth Amendment rights. The court ruled the Does’ complaint not justiciable. Appellants directly appealed to this Court on the injunctive rulings, and appellee cross-appealed from the District Court’s grant of declaratory relief to Roe and Hallford. Held:

(a) Contrary to appellee’s contention, the natural termination of Roe’s pregnancy did not moot her suit. Litigation involving pregnancy, which is “capable of repetition, yet evading review,” is an exception to the usual federal rule that an actual controversy must exist at review stages and not simply when the action is initiated. Pp. 124-125.

(b) The District Court correctly refused injunctive, but erred in granting declaratory, relief to Hallford, who alleged no federally protected right not assertable as a defense against the good-faith state prosecutions pending against him.

NO! Women are NOT Bitches, Hoes, Punching Bags, Breeding-Machines, or Sex Objects! Abortion On Demand and Without Apology! Drive Out the Trump-Pence Regime – No Fascist USA!

Her husband and five children (ages 6 months to 12 years) were living in Pittsburgh, Pa., with her parents due to limited financial resources when she learned she was pregnant again. Clara attempted a self-abortion with a knitting needle. Her doctor, knowing she was seriously ill and in severe pain, delayed sending her to a hospital for several weeks. The Catholic hospital where she died chose to list the cause of death as “pneumonia.”

Demonstrator Jenny Heinz, spoke of her experience where her small sign draped on her back of the #RefuseFasicsm.org flier, “NO! In the Name of Humanity, We REFUSE to Accept a Fascist America—RefuseFascism.org.”

She said she has been wearing this sign everywhere since she got it at a protest in November. She is a longtime Metropolitan Opera and New York Philharmonic subscriber, and has been to hundreds of performances at Lincoln Center over the past 60 years. At Lincoln Center this time she was told she would have to remove the sign to enter.

She chose to not remove it, and was barred from the performance. She told the NYT “At what point does one draw the line? We’re talking about freedom of expression.” 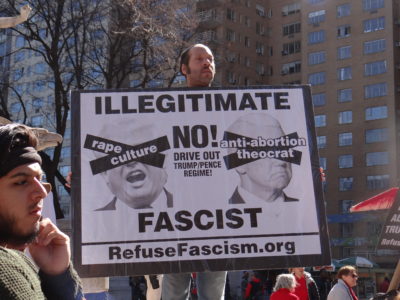 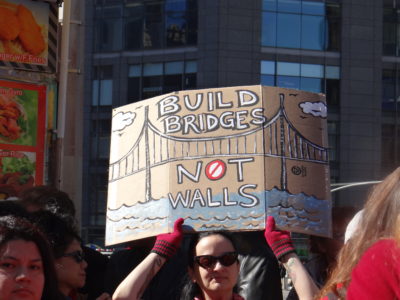 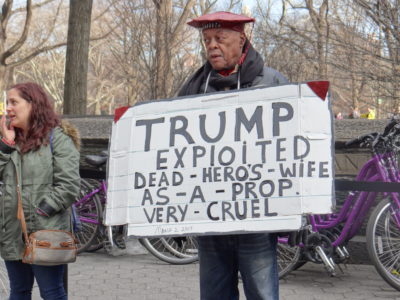