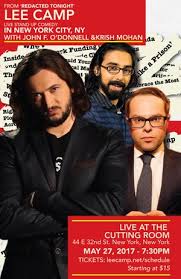 Krish Mohan joked about how hard it was growing up in the US as an immigrant. From Krish Mohan’s website:

Mohan has been featured on NPR and in the Arch City Comedy Festival. Krish is a regular contributor to the Indie Bohemians, a radio show that airs on iHeartRadio and affiliates all across the country. Krish is also the host, writer and creator of “Fork Full of Noodles”, a weekly satire web series that focuses on socio-political issues. Krish also hosts his own podcast called “Taboo Table Talk” where talks to guests about socio-political issues that should be talked about at the dinner table.

John F. O’Donnell is an actor and writer, known for Redacted Tonight (2014), Who the F#ck Is Chip Seinfeld? (2011) and King Kelly (2012). He was joking about Jay Z’s song, New York with Alicia Keys, in which the chorus goes, “New York, concrete jungle where dreams are made of, There’s nothin’ you can’t do, Now you’re in New York, These streets will make you feel brand new, The lights will inspire you, Let’s hear it for New York, New York, New York”. O’Donnell said, “Screw you Jay Z, your song is inaccurate”, to the tune of New York.

O’Donnell also joked about doing Comedy shows in DC and asking the audience a question like, “How many people think Edward Snowden is a hero?’ The NY audience cheered, while O’Donnell said he figured that would be the response from the crowd, saying, “he revealed the biggest surveillance state in the history of the world that are completely undermining all our civil liberties”. But, when O’Donnell asks that question in DC, “I’ll get this little trickle of applause, making a face like he just sucked on a lemon, “Why, Why am I doing this? No, This is my nightmare, this is my nightmare.”

When “O’Donnell asks the DC crowd if they think Snowden is a traitor, he gets the same trickle applause, “Oh, I don’t want to be here”. Then, O’Donnell asked the DC crowd, “Round of applause if you didn’t applaud because you’re maneuvering from political positions and you’re not sure who’s around and you don’t want to reveal how you feel about the situation.” Then the crowd starts applauding wildly. “Yeah, Yeah”.

Lee Camp opened his part of the show by saying that he’s going to get into some “issues the country is having” and “for the first 45 minutes of the show we’ll just pair off and hug and cry. We’re just going to be hugging and crying, so just get into 2 lines”, motioning a line with his arm. Lee then went on to say, “In Trumps’ America I feel freer. I could come up here, and my whole show, I could, literally, drop my pants and take a dump on the stage and that wouldn’t be the craziest thing you saw this week”.

Cheering and clapping followed, “In late stage capitalism the Corporations take control of the state, it’s been happening but, until now you didn’t point and go”, he said. “That’s the CEO of Exxon Mobile. Trump is literally a brand name”.

“It amazes me that we’re OK with our current voting system and our current election system”, moaning and booing from audience, “OK, I mean, the people in this room aren’t OK with it”. Then, cheering and clapping, “But, I got bad news for ya, there’s a couple of people outside…”. “A lot of places they have computers, it’s proprietary code, you can’t see what’s going on, you cannot check whether or not you’re getting a legitimate result, it is a complete black box voting system and we seem fine with it”.

“Now Imagine, it’s the last 10 minutes of the Super Bowl where they just sent the crowds home, they pulled the curtain, they turned off the cameras, and 10 minutes later a Ref comes out and says, Ay, Cowboys won. It would be like an angry Mardi Gras! It would be the end of the world!”. Loud laughter was then coming from the audience and followed by clapping.

Camp continued, “Like, money is nothing to us. Donald Trump just gave Saudi Arabia $460 billion in weapons over the next 10 years which is enough to end world hunger for 15 years. OK? We have way too much money and I love when they say we don’t have enough money to build up our infrastructure, bridges and shit. We have 66 thousand structurally damaged bridges in this country, we don’t have the money to fix em, Really? But, you have the money for the largest surveillance infrastructure ever created, ever to watch every one of our citizens. Then when we say I actually know where we can get the money, Tax the Rich and make Corporations pay their fair share of taxes, as opposed to Google paying like 4% because they’re like ‘based in Ireland’.

“Every time we say that they say, ‘That’s class war’, No we’ve been in the middle of a class war for the past 40 years perpetrated by the top .1% sucking the wealth and the resources for a tiny number of individuals.” 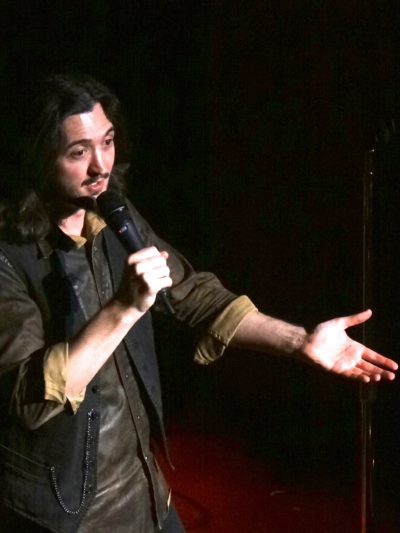 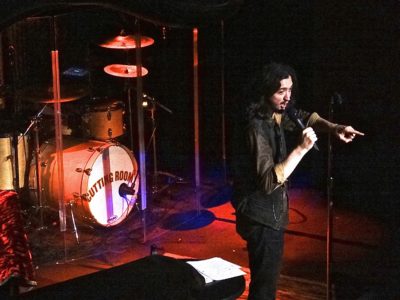 Lee is the head writer and host of the national TV show Redacted Tonight with Lee Camp on RT America. He’s a former contributor to The Onion, former staff humor writer for the Huffington Post, and his web series “Moment of Clarity” has been viewed by millions. He’s toured the country and the world with his fierce brand of standup comedy, and George Carlin’s daughter Kelly said he’s one of the few comics keeping her father’s torch lit. Bill Hicks’s brother Steve said Lee is one of only a handful with Bill’s “message and passion.”

“An amazing writer and a great political thinker. He’s the change you and I want to see.” — Janeane Garofalo

Lee Camp’s stand-up comedy has been featured on Comedy Central, ABC’s Good Morning America, Showtime’s The Green Room with Paul Provenza, Al-Jazeera America’s election night coverage, Current, the BCC’s Newsnight, E!, MTV, and Spike TV, and headlined over 500 college shows. Lee has written for The Onion, Comedy Central, Comedy Central and the Huffington Post, and wrote the acclaimed essay collections Moment of Clarity: The Rantings Of A Stark Raving Sane Man, and Neither Sophisticated Nor Intelligent.

For a video to the show: