I was listening to The Takeaway program on NPR one afternoon, and there was an interview playing with a black woman who was discussing her concerns about naming her son with a name that would identify him as black or a “black-sounding” name.  There were two responses from other black listeners expressing their offense at the woman’s aversion to using a name that would identify her child as black.  Their position was that racism and discrimination will not go away if you strategically give your children names.

The listeners felt that an individuals name was not that important.

A name is a source of identity and can reveal your ancestry, religious beliefs and interests.  It can tell about your life experiences and expectancy, your upbringing and societal influences.  An excellent example of how powerful and enduring a name is, is illustrated by the scene in the movie Roots adapted from Alex Haley’s book of the same name, where the character of Kunta Kinte is being tortured on the order of a white overseer because he refuses to change his name to Toby. 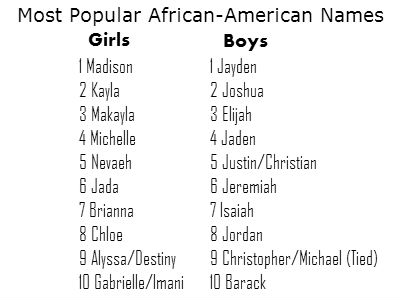 A name is very profound and can have an impact on your experiences in life, according to some philosophies and cultures.  The Kabalarian Philosophy believes that a “balanced name can channel you toward your true purpose in life and can impact on the way you look at yourself, the way others perceive and treat you, your level of confidence, your energy, creativity and self-esteem.”

When Christians convert to Islam they adopt an Arabic name in order to identify themselves as Muslims.  Reportedly, Native Americans have been known to wait up to a year before naming their children in order to see what their child’s personality traits will be to be able to give him a name suitable to their personality.  In some African cultures, a baby is named for the circumstances surrounding their birth, and again for the family’s hopes for the future or for a beloved relative so that the child will grow to be like that person.  In Japan, they name their children after moral or virtuous qualities or for their position in the family structure.

Rediscovered Origins of a Black Name

“Black-sounding” or “ghetto” names such as Lynishia, Laquisha, Shaqueen, or Marquise are common in the black community and are controversial.  They are connected to stereotypes about black people: ignorant, inner-city, “welfare-mamma’s”.  People like the woman being interviewed on the radio program believe that these kinds of names serve as a disadvantage to the people who have to wear them.  Tests using Google have clarified the negative association that these names have.  The image results that come up when these names are entered into Google are usually mug shots of young black men or women or of women that are dressed as strippers.

Critics of these names believe these names are without authentic cultural roots and can be a source of embarrassment and a hindrance to social and economic advancement.  According to one educational consultant, the longer, more uniquely spelled a child’s name is, the less likely the child is to be called on to participate in school.  People have reported that employers throw out the resumes that are from people with “black-sounding” names without looking at the person’s credentials.  Individuals with “ghetto” names have been known to shorten them in order to avoid embarrassment in casual and professional situations.  So where do these names come from?

During slavery, when Africans were made into slaves in America, they were stripped of their tribal and clan names and they were given the names of their slave master in order to dehumanize them and void their identity, hopes and dreams.

After the Civil War, blacks wanted to reinvent their identity.  They did not know about their ancient naming ceremonies due to being cut off from their roots, and in order to be unique, they began embellishing their names.  During the Civil Rights Movement, black people rediscovered their African roots, and along with the rise of Islam, they began using Arabic and Swahili names.

As the sounds of jazz and hip-hop grew in influence, they were occasioned by an increase in lyrical expression.  As a result, black people’s names became a mixture of Swahili names and percussive sounds which gave rise to names such as Lacretia, Aniqua, DeShawn, DeVonta, or Shaquille.  Economic disadvantage inspired parents to name their children for their dreams and material desires for luxury items and gave rise to names the like of Gucci, Lexus and Mercedes.  Qualities that parents felt described their children produced names in the vein of Serenity, Heaven or Precious.

These names illustrate a lack of cultural awareness attendant to a people who have been deprived of a proper education about their history, and serve as a reminder of the damage that has been done as a result of this miseducation.  They illustrate the struggle black people are enduring in order to carve out an identity.

Senux Johnson writes for Democracy Chronicles from Brooklyn, New York. Checkout the rest of our international team of authors as well. Together, they help cover free and fair elections on every continent with a focus on election reform in the United States.

Home | DC AUTHORS | The Origins of a Black Name