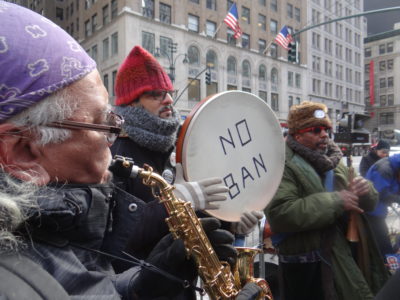 Almost a thousand people gathered after the march for Education on the steps of the NYC Public Library 42nd St. to say “NO” to Trump and the DAPL pipeline at Standing Rock where just two weeks ago. February 22 the Oceti Oyate camp, which used to be known as Oceti Sakowin, along with other camps on treaty land claimed by the US Army Corps, were ordered to evacuate by 2pm.

Ten unarmed water protectors were arrested and one was badly injured in a violent eviction. Many of those arrested were journalists and legal observers, targeted for documenting police violence and rights violations.

Six days before the national Rise with Standing Rock mobilization in Washington, DC, march on Trump Tower (on 5th Avenue) to protest the Dakota Access Pipeline and its threat to the Standing Rock Sioux, their sacred lands and clean water.

Sara Flounders has been active in progressive and anti-war organizing since the 1960s. She is co-director of the International Action Center and co-authored and/or edited 10 books the IAC published on U.S. wars and sanctions against Iraq and Yugoslavia, on U.S. use of depleted uranium weapons, on Haiti and Colombia, and on opposing military recruiters. She writes regularly for the Marxist Workers World newspaper, and speaks on U.S. imperialist aggression on alternative and corporate media outlets.

She helped coordinate major International War Crimes Tribunals to document the U.S. planned destruction of Iraq and Yugoslavia and a Tribunal on earlier U.S. crimes in Korea. Many dedicated activists know Flounders from her organizing of mass meetings, major antiwar rallies, and international campaigns and via internet and videos.

She says, “My goal is to build confidence in the potential of powerful grassroots movements as I help build a revolutionary struggle for change within the U.S.” Flounders called for solidarity with “brothers and sisters in Standing Rock and all oppressed people who are the targets of capitalist profit of Trump and the banks and when we stand together with all oppressed people we are so much stronger”.

Sara called for people to come out this Wednesday for the march for International Women’s Day at Herald Square. She’s calling for men and women to come out and support it. Sara also mentioned a big march against white supremacy on Saturday April 1st put on by the People’s Power Assembly. And on May Day Monday Sara spoke about a:

“Global shutdown, walk outs, stay away, anything it takes for people to stand together. THIS IS A TIME OF ENORMOUS RESISTANCE but, it is resistance that has sparked by our indigenous brother’s and sisters at Standing Rock. So when we say ‘we stand with Standing Rock we stand with struggle, resistance. This is the way we’re going to push Trump back and demand rights for all people, Thank you”.

The rally was held at 1:00 pm, then marched at 2:00. The march began in front of the New York Public Library and went to Trump Tower and beyond.

Buenos Dias Hermano, I hope you are keeping safe and healthy from the pandemic I’m enclosing a short story about mom for your consideration Please take good care, Julio Cesar.

Senator Mitch McConnell (R-Ky) suggested states should file for bankruptcy. The underpinnings of his recommendation rehash our current predicament.