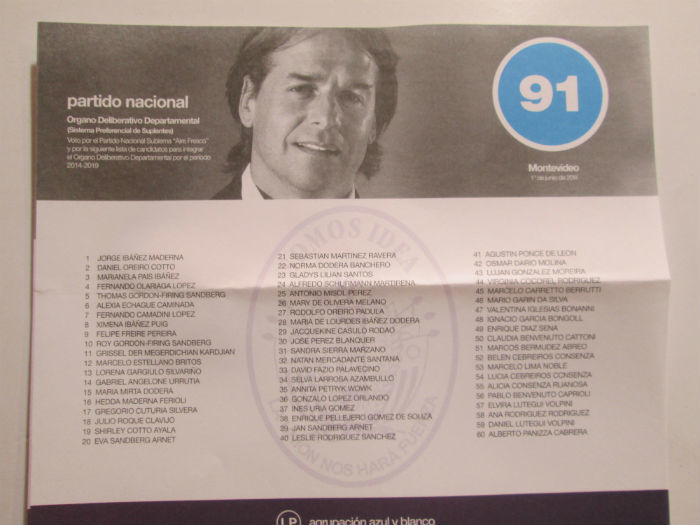 From Montevideo,
Luis Lacalle Pou has come out as the clear victor of the Uruguayan Primary Elections, even though Sunday’s elections defined the other three main presidential candidates that will fight in October’s Presidential and Parliamentary elections.

With just over 74% of all precincts counted, Luis Lacalle Pou, son of former President Luis Alberto Lacalle and great-grandson of President Luis Alberto de Herrera, obtained approximately 54% of the National Party’s votes in this year’s voluntary elections; the race was billed as the tightest contest in recent history, with most polls suggesting his main internal rival, Jorge Larrañaga, would win with a small margin. His defeat came as a blow to his camp, which had garnered most party endorsements, but was also met with genuine surprise from all other candidates and academics, given the huge success of his “positive” campaign, reflecting a high regard for democratic values in Uruguayan society.

Yesterday’s attendance at the Primaries was, however, the lowest ever recorded since the Constitutional reform of over a decade ago, that divided elections into four stages, the second being the Presidential-Legislative elections, the third a potential run-off and the last being municipal elections. Attendance this time around is projected to have reached 38% of the total eligible population, or over 900 thousand voters.

Not only was this a record low, but the party that lodged the most votes was the National Party at an estimated 43%, trailed by the Broad Front at 36% and the other two major parties accumulating about 20%. This fact, together with polls estimating the opposition total surpasses the ruling party by a margin of approximately 10-12%, should have the Broad Front rethink its campaign strategy come the start of July (after World Cup mayhem expected in a football-loving nation). These results are turning out to be some of the most remarkable in recent history, and should all but guarantee a very intense election period this next spring.

Roy Axel Gordon-Firing Sandberg writes for Democracy Chronicles from Montevideo, Uruguay. Checkout the rest of our international team of authors as well. Together, they help cover free and fair elections on every continent with a focus on election reform in the United States.