Born in England on January 29, 1736, the largely forgotten Thomas Paine is known in some circles as the “most-important Englishman whoever lived” and was the best selling author of the 18th century. His birthday has long been celebrated by democracy loving people all over the world and should be celebrated as an international holiday to reflect the great impact of this forgotten founding father.

Paine was a central character in the American and French Revolutions on the side of democracy and human rights. He supported the causes of both Native Americans and African slaves in a time where this was heresy. Perhaps, his most important contribution to modern democracy are the words he wrote to inspire America to revolution for the sake of representative government in January of 1776:

In honor of Thomas Paine’s birthday, I am proud to announce a new collection I have put together to showcase some of my favorite artistic creations that highlight the founding father. As Democracy Chronicles Founder and Editor-in-Chief I have made over 1,000 political memes of one kind or another. My collection of memes can be found on DC’s Flickr and they are separated into tags and albums including albums like Adrian’s Favorite Memes, the Democracy Flag Series and Democracy Quote Memes.

This Thomas Paine memes collection is free for you to use and spread around and can be considered to be in the public domain. Just spread the Paine as you see fit.

The following totally original and unique political cartoons were made with Photoshop and all images were created to accompany an article on our website. I hope you enjoy. I would love to read some reactions so add your comments below! 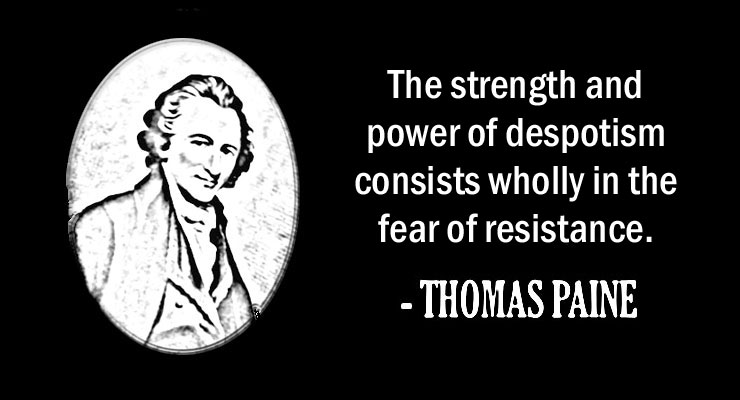 Paine has so many quotable lines that there are many left out of my meme collection that deserve mention. Some Thomas Paine quotes I have not made into memes yet:

My country is the world; my religion is to do good.

These are the times that try men’s souls.

The harder the conflict, the more glorious the triumph.

If there must be trouble, let it be in my day, that my child may have peace.

To argue with a person who has renounced the use of reason is like administering medicine to the dead.

To say that any people are not fit for freedom, is to make poverty their choice.

Those who expect to reap the blessings of freedom must, like men, undergo the fatigue of supporting it.

What we obtain too cheap, we esteem too lightly; it is dearness only that gives everything its value.

The real man smiles in trouble, gathers strength from distress, and grows brave by reflection.

O ye that love mankind! Ye that dare oppose, not only the tyranny, but the tyrant, stand forth! Every spot of the old world is overrun with oppression. Freedom hath been hunted round the globe. Asia, and Africa, have long expelled her. Europe regards her like a stranger, and England hath given her warning to depart. O! receive the fugitive, and prepare in time an asylum for mankind.

A brief biography of Thomas Paine from ushistory.org:

On January 29, 1737, Thomas Paine was born in Thetford, England. His father, a corseter, had grand visions for his son, but by the age of 12, Thomas had failed out of school. The young Paine began apprenticing for his father, but again, he failed. So, now age 19, Paine went to sea. This adventure didn’t last too long, and by 1768 he found himself as an excise (tax) officer in England. Thomas didn’t exactly excel at the role, getting discharged from his post twice in four years, but as an inkling of what was to come, he published The Case of the Officers of Excise (1772), arguing for a pay raise for officers. In 1774, by happenstance, he met Benjamin Franklin in London, who helped him emigrate to Philadelphia.

His career turned to journalism while in Philadelphia, and suddenly, Thomas Paine became very important. In 1776, he published Common Sense, a strong defense of American Independence from England. He traveled with the Continental Army and wasn’t a success as a soldier, but he produced The American Crisis (1776-83), which helped inspire the Army. This pamphlet was so popular that as a percentage of the population, it was read by or read to more people than today watch the Super Bowl.

But, instead of continuing to help the Revolutionary cause, he returned to Europe and pursued other ventures, including working on a smokeless candle and an iron bridge. In 1791-92, he wrote The Rights of Man in response to criticism of the French Revolution. This work caused Paine to be labeled an outlaw in England for his anti-monarchist views. He would have been arrested, but he fled for France to join the National Convention.

By 1793, he was imprisoned in France for not endorsing the execution of Louis XVI. During his imprisonment, he wrote and distributed the first part of what was to become his most famous work at the time, the anti-church text, The Age of Reason (1794-96). He was freed in 1794 (narrowly escaping execution) thanks to the efforts of James Monroe, then U.S. Minister to France. Paine remained in France until 1802 when he returned to America on an invitation from Thomas Jefferson. Paine discovered that his contributions to the American Revolution had been all but eradicated due to his religious views. Derided by the public and abandoned by his friends, he died on June 8, 1809 at the age of 72 in New York City.