We have launched a crowdfunding project on Kickstarter to finish and distribute a documentary of the highest quality and with the farthest reach. Our film, “The Design of a Broken System”, requires that we muster all the help we can get from our friends, family, readers, democracy activists, working people and the broader community. We have been gathering footage for a year now and the editing process has hardly begun. More interviews are lined up. More protests scheduled. But the time is now for a strong boost from our friends! 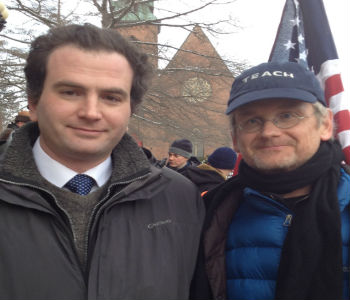 Making a film that will add to the election reform movement is a challenge. But it’s said the promise of crowdfunding is to take a community that is hungry for change and give them a platform to act. With your help “The Design of a Broken System” will have its reach and impact amplified enormously. Amazing footage is already in our hands that has the making of an incredible film. Checkout the kickstarter to see the four minute trailer video to get an idea of what we have gathered thus far.

During the brutal winter of 2014, our film crew (including director John Amaruso  and cinematographer Rob Martin) drove from New York City to Concord, New Hampshire to support Lawrence Lessig and the NHrebellion protesters as they marched across frozen pavement in a citizen’s movement against a corrupt system. We were accompanied on our trip by Jeff Kurzon, a candidate for the House of Representatives in New York City’s 7th District who is deep in a primary race against a longtime incumbent to culminate in elections this June. Jeff stopped to see his family on the way up so it only made sense that his chief of staff at the time, Joshua Hedglin, joined our film crew for the ride up. We had met Jeff and his staff for an interview only the previous month where he had originally invited us to join him in New Hampshire. Also on the journey was my brother Dan Tawfik, my cousin Freya Krasnow, and a good friend Gretchen.

Once in New Hampshire, we met up with the NHRebellion and spent our time filming their march across New Hampshire’s snow covered local streets. Jeff Kurzon wrote this summary of the events and we got some great footage for our upcoming documentary including an interview with the top-level campaign finance expert Lawrence Lessig from Harvard University that will be featured in the movie.

Movements like the NHRebellion and free thinkers like Lawrence Lessig are the bread and butter of this film. But we need your help to get us to the next step of awesomeness by freeing us to spend on making this project the best it can be. Democracy Chronicles is building a community and we have been doing so for since December 2011. Let’s take action together.

Support American democracy! Submit your questions about our documentary at our contact page.

The Design of a Broken System